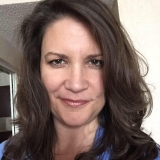 Her career started in 1999 shortly after the birth of her daughter when she opened a breast pump rental business. As one of the only locations in the area, she was also involved in La Leche League and the Ashtabula County’s breastfeeding coalition, the Breastfeeding Education and Support taskforce.

In 2009, she moved to Muskingum County in Ohio and worked as a Breastfeeding Peer Advisor at Nationwide Children’s Hospital in Columbus, supporting mothers in their pumping efforts and providing information on donor milk to those who were not able to pump. Lisa was certified as an IBCLC in 2011 and became the Breastfeeding Coordinator for the Zanesville-Muskingum County Health Department – WIC program. She currently serves in that position, mentoring Breastfeeding Peer Helpers and providing lactation consultant services to breastfeeding mothers in the program. She is responsible for breastfeeding promotion and advocacy in the community and recently spoke with the local shopping mall about becoming breastfeeding friendly.

Lisa has been active in the Ohio Lactation Consultant Association (OLCA) as President-Elect in 2012, President 2013-2015, and currently as Past-President. She is a member of the Media Committee and the OLCA Licensure Taskforce as well as OLCA Chapter Liaison to USLCA. She is currently the administrator multiple official Facebook pages including USLCA’s own page for moms – “Breastfeeding Talk with USLCA.” She is also a member of the Ohio Breastfeeding Alliance. Being involved in the Maternal Child Health Subgroup of the Zanesville-Muskingum County Community Health Improvement Project (CHIP), and the Infant Mortality Taskforce allows me to remind others of the impact of breastfeeding on a multitude of public health issues,” says Lisa. She feels strongly about advocating for the IBCLC credential as a stand-alone, valuable, and specialized expert and frequently speaks to IBCLC hopefuls to inspire, encourage, and mentor them.
Lisa is clearly a “member who has made a difference”.